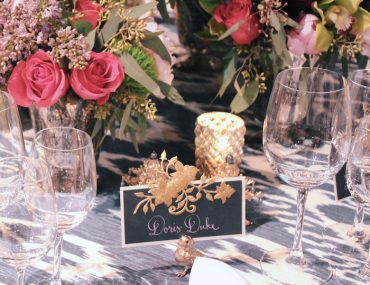 A Look at My Lenox Hill Neighborhood House Gala Table!

I’m so excited to finally share photos of my completed Lenox Hill Neighborhood House Gala table! When I learned that the theme of this year’s event was “High Society” I decided I would choose a “high society” muse to inspire my table design and I immediately thought of the iconic American heiress Doris Duke and her magical Hawaiian retreat which she called Shangri La. The daughter of a wildly successful tobacco and energy magnate, Duke was known as the richest girl in the world even earning the nickname “Million Dollar Baby.” She loved exotic travels which included journeys to …

Doris Duke was an American heiress and the only daughter of James Buchanan Duke who was the magnate behind a wildly successful tobacco and energy empire. (The Duke Energy Company which he founded in 1904 still provides power …